An hour or so of goalty

2 hours of goalty. My first time doing anything hard outside. Body did not like it.

My feet forgot how to wear cleats. I got a blister on one heel and will prolly lose a toenail. Sore all over. Got a bit sunburnt. So tired after just a few hours.

Lifting is good and all, but its time for shuttles/shuffles.

We had 9 for goalty today. The games were fairly good, but Diana pointed out that there’s not enough focus on not turning the disc over, and it’s too easy to poach instead of playing tight D. There are some possible modifications we can make to help the latter, but I’m not really sure about the former. We already keep score, but no one pays attention to it that much.

I stayed with Miriam on Sunday night after Pro Flight, and she invited me to play goalty with her team. At first I thought I’d be too tired and sore to play, but I decided to come out and see how it went. I ended up playing the whole time and had a blast. The people were fun and we had the right number of subs - enough to feel fresh but not too many to stand around a lot. I’m still learning goalty, so I made a bunch of mistakes, but I did mack a disc for a goal and throw a Rochester for a goal that was dropped. Overall I noticed that people have a tendency to all hang out in and around the goal, which makes scoring extra hard. I think more discipline to stay away from the arch would create more space and make scoring easier.

90 min of goalty at Miriam’s going-away party. We played double-goal goalty for the first time. It was fun, though I prefer single-goal because its encourages better defense. With two goals, you expect to get scored on so you hang back to protect against the fast break on the way back. So you don’t always sprint to get back and protect your goal. Besides that, it was a great time.

2 hours of indoor goalty. I bought 2 home depot buckets, filled them with sand, cut a hole in the lid, and shoved the goalty posts in. It worked out pretty well for indoor play. The game was pretty high-level. Hoping to make this a regular thing.

Played a really fun goaltimate tournament in Boston. The tourney was really high-level - all elite club players who play a lot of goalty. I started out playing pretty poorly but learned a lot and got significantly better throughout the day. Our team lost all our games, but then we played a few hours of pickup, which was even better than the games.

The main things I learned are that the easiest way to score is to get the disc in front of the goal, in the middle. Then have one person stand behind the scoring circle (a few feet back). This forces their defender to choose to look at them or the thrower. It also makes sure they can’t hang out in the middle, and have to either play tight on you (which lets you cut in for the goal) or play loose, which lets the thrower throw it over them to you. You can also score by making a horizontal cut behind the goal into the scoring space. In general, as with ultimate, its easiest to score by cutting into the space where you want the disc, not by already being there.

After the tourney, we went to a space-themed Halloween party, played a bunch of flipcup, ate delicious pie, and hoverboarded on PK’s balance board. I got home after 3am.

Played several hours of goalty with Amp. We played 5v5 for most of the time, then switched to 4v4 at the end. I’m completely sold on the clear box vs the clear line. The box encourages you to play defense the whole time, not just near the goal. 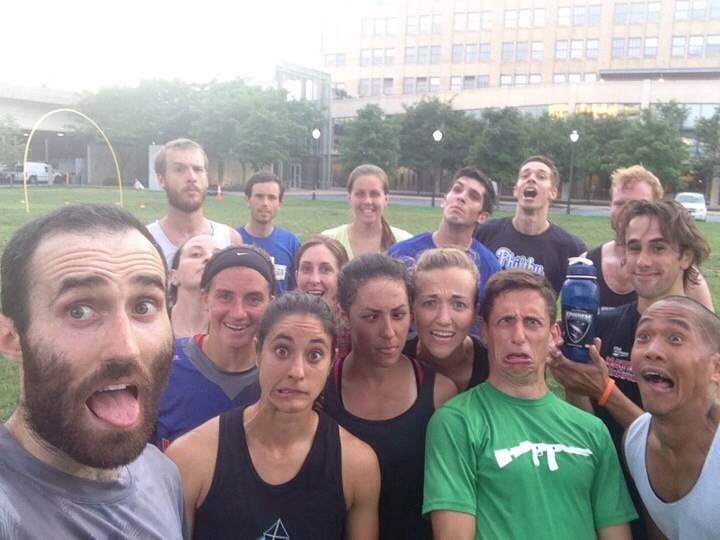 Played a bunch of goalty with the TopScore crew, Colin, and Matt Michelson. We must have played at least 8 games to 3. The level was pretty high, though D started slacking towards the middle. The last game really picked up the intensity though.

After goalty, dinner at Vientiane Cafe.

Played a solid bunch of goalty at edgely. We managed to plays 4s the whole time and even had subs for most of the games. Colin and Z showed up late and added some more oomph to our games. After games, we ate some PADA pork and beer (spring league finals were going on at the same time) and headed home. On the whole I played pretty well - got a lot of Ds and scored a bunch. But I also threw away so many. Colin played really well and had almost no turnovers.

May 28
Goaltimate and Hot Box at Left Bank

AMP Wednesday practice was called off so the captains can finalize the roster. So we decided to come out and play anyway. Played 3 or 4 games of 3-on-3 goaltimate, then played 2 on 2 hotbox till the lights went out. Great workout, lots of fun, can’t wait to do it again Saturday.